Daughter of Smoke and Bone Review

Daughter of Smoke and Bone by LAINI TAYLOR 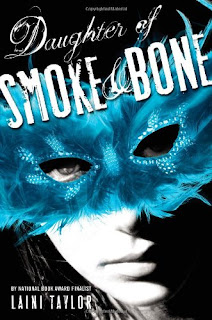 Around the world, black handprints are appearing on doorways, scorched there by winged strangers who have crept through a slit in the sky.

In a dark and dusty shop, a devil's supply of human teeth grown dangerously low.

And in the tangled lanes of Prague, a young art student is about to be caught up in a brutal otherwordly war.

Meet Karou. She fills her sketchbooks with monsters that may or may not be real; she's prone to disappearing on mysterious "errands"; she speaks many languages--not all of them human; and her bright blue hair actually grows out of her head that color. Who is she? That is the question that haunts her, and she's about to find out.

When one of the strangers--beautiful, haunted Akiva--fixes his fire-colored eyes on her in an alley in Marrakesh, the result is blood and starlight, secrets unveiled, and a star-crossed love whose roots drink deep of a violent past. But will Karou live to regret learning the truth about herself (goodreads)?

Review:
I want to start off by saying that I have never read  an angel novel until now and I'm afraid that this book has ruined me for all other books in the genre. This book went above and beyond, it was young adult but dealt with some pretty mature themes. Without further ado, on to the review!
Karou is an eccentric 17 year old with a knack for telling elaborate stories about fictional characters, except they aren't fictional. Karou's "other life" is filled with impromptu trips to Morrocco, collecting teeth from gravediggers and being coddled by a half snake half woman by the name of Issa. What is she? Karou has no idea, until she meets the Angel Akvia who seems to have all of the answers and wants to destroy her makeshift family of misfits.
Karou's world is a colorful and detailed treat that will enchant any reader. Having been to Prague myself, Taylor's description of the fairy-tale like city and spot on, and her "elseworlds" paint a perfect image for the imagination. This felt like a fantasy novel given intricate detail of the characters, their history and their world, it was like stepping into an entirely different (and believable) world; I'm pretty sure it was Laini's creativity with her characters and the worlds that she created for them which grabbed and held my attention until the very last page.
The writing style was engaging with some chapters only being a sentence and others a series of phrases which are explained later on in the book. Her descriptions were so interesting and the interactions felt true. I mean, how are you not drawn into phrases like "once upon a time, an angel lay dying in the mist. And a devil knelt over him and smiled?" Taylor is such a brilliant storyteller, every description, every action, every utterance flows and paints an image, I don't know how else to explain it besides perfect.
The romance took a while for me to get into until the story progressed and more information was revealed, the really felt for our characters. Speaking of characters, I love all of the characters. Whether the character is an enigma or a mysterious amber eyed stranger, you understand them, feel for them, and even sometimes forget that they do not exist outside this novel.
Overall if you like novels with fantasy elements and an intricate plot/world, read this book. It's fantastic, it's more than fantastic, it's ENTHRALLING and I needed the sequel yesterday.
I recommend this novel for those who enjoy young adult novels with major fantasy/magic themes with a budding romance story.