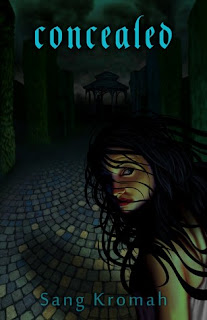 When sixteen year-old Bijou Fitzroy and her nomadic grandmother leave New York City to live in a home in the sleepy town of Sykesville, Maryland, Bijou thinks she will finally be able to live a normal life and be like everyone else. This move will be permanent, and Bijou cannot be anymore thrilled. After years of being shut away by her grandmother, Bijou will finally able to interact with peers, make friends, go to school, and live like a normal teenager.
Moving around and being homeschooled definitely made it difficult to make friends, but there are other reasons for Bijou’s solitude. With eyes that constantly change from gray to green to a honey-coated shade of brown and an ability to feel exactly what other people are feeling, the concept of obtaining closeness is more of a fable than a reality. Although her eyes are beautiful, their constant shift in color instills a sense of fear within other people and causes them to look away. Bijou’s premonitions, blackouts, and semi-prophetic dreams of a faceless boy don’t help her social musings either. Regardless, she decides to attend the local high school.

Bijou is immediately introduced to Sebastian Sinjin, a quirky and unusually beautiful boy who doesn’t seem to belong in a high school in nowhere Maryland. Sebastian is also special. Instead of looking away from Bijou, he makes direct eye contact with her. And when he shakes Bijou’s hand something dark and familiar to awaken within her as an electric shock surges through her body. Bijou soon finds herself deeply attracted to Sebastian, who remains aloof and often acts like Bijou doesn’t exist.

Despite the pains of having her first real crush, Bijou makes friends quickly and excels in all of her classes…well, all except for Mythology with Mr. Jennings. Mr. Jennings’ class starts off great with endless discussions of djinn and how they conceal themselves from the human eye, but things soon take a turn for the worse when the stories of the mythical creatures begin to take shape in Bijou’s life (goodreads).

This is a very hard book to rate, I would have to place it somewhere between 3 1/2 and 4 stars.

Kromah's debut book is a very colorful and detailed novel that is unlike anything popping up on the young adult shelves today.

Bijou Fitzroy is odd, not only because she lacks social skills due to years of homeschooling and constant moving, but her appearances are also very off putting. When she meets Sebastian and his twin sister Amina, she realizes that there just may be a reason why her looks attract so much attention, a reason that her grandmother hid from her for years.

When Bijou moves to Eldersburg the questions start to come up. Why can she sense 'the others?' Who is this Austrailian kid that she can't stop thinking about? And what on Earth is her grandmother hiding from her? Kromah deals with these questions and their reveal very strategically. She gives just enough information to hint that an answer is near, but with the answer she creates a new and even bigger question that the reader is dying to find the answer to. Even with so many questions and answers popping up, the plot moves at a steady pace throughout with a slew of interesting characters to guide you on this journey.

One thing I really liked was the diversity among the characters and among the mythos. In YA the standard is white people having weird things happen to them in a white town, with white secondary characters. Luckily, Kromah decides to spice it up a bit by having a main character who doesn't even know what her nationality is. We are then introduced to a bunch of other secondary characters who each have a mind for themselves with motives that the reader would not guess until the very last chapter. Like I stated earlier these characters have a motive, there is a reason why they are doing what they are doing, and it just isn't because someone told them to follow orders which is very refreshing.

The love story was not very prominent but it was hinted at heavily, and there were even hints of introducing a  love triangle which I am a bit weary about ( you know how I feel about the dreaded love triangle). Regardless of the love story, both the main characters, Sebastian and Bijou, have very distinct personalities and are very solid characters. They do not depend on each other and they are very capable of making their own decisions.

Lastly, the writing style was told from the first person perspective so the reader was just as confused by the events of the book as Bijou was. One thing I did notice about the writing style is that the author had a tendency to overuse the exclamation mark. Although it does not sound like something worth noting, there were many times where I had to reread a phrase because the excited tone that I was giving the characters did not seem appropriate. Other than that, the writing style was very solid and allowed the reader to really delve inside Bijou's curious and interesting head.

The reason why I am stuck in no man's land with this rating is because there were a few small things that when repeated, kind of got to me. For example, there were a few typos and grammatical errors all throughout the novel, and an occurring mistranslation. And given the amount of information and characters introduced into this single novel, I really believe that it could have been broken up into different books because there were so many characters and relationships between said characters that I almost felt the need to draw myself a map.

Overall, Kromah's novel is extremely original and well-crafted. She introduces us to a very interesting world filled with mythologies that and secrecy that will have you waiting for the second book!

I recommend this novel for those who loved the old mythos are and looking for something new.