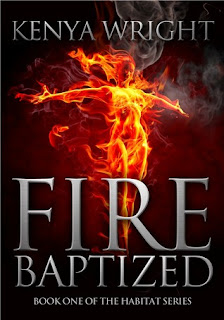 Since the 1970s humans have forced supernaturals to live in caged cities. Silver brands embedded in their foreheads identify them by species: a full moon for Vampires, a crescent moon for Shifters, a pair of wings for Fairies, and the list goes on, for each supernatural species has been tagged and categorized by humans.

Lanore Vesta is marked with a silver X, the brand of Mixbreeds, second-class citizens shunned by society. She stays to herself, revealing her ability to create fire only during emergencies. All she wants to do is graduate college and stop having to steal to survive. But when she stumbles upon a murder in progress, she catches the attention of a supernatural killer. Now all she wants is to stop finding dead bodies in her apartment.

Enlisting help from her Were-cheetah ex-boyfriend MeShack and a new mysterious friend named Zulu, she is steered through the habitat’s raunchy nightlife. But their presence sometimes proves to be more burden than help, as they fight for her attention.


While the corpses pile up, and the scent of blood fills the air, Lanore is left wondering: will she find the psycho or die trying (goodreads)?


Kenya Wright's debut novel is a refreshing breath of air that will suck you into Lanore's world with each turn of the page.
Lanore Vesta is a Mixie or a Mixbreed. She lives in the shady part of town with her childhood best friend and survives each day by avoiding the Pureblood who detest the the existence of mixed Supernaturals. Her days of laying low come to an end when she witnesses the murder right in her neighborhood.

I loved the creativity and originality of this book! Wright creates a complex world full of social inequality, conflict and jargon. In a world where Mixbreeds are considered second class citizens (with their own bathrooms and everything) Lanore is one of the faces of a group that fights for Mixie rights. The thought of a killer targeting Lanore is thrilling enough (and gruesome!), but the complex and detailed world make this book memorable.

The characters are all strong, independent and fabulous creations. I totally fell in love with the Bad-Boy-But-Big-Softy MeShack. Lanore is a great heroine who knows when to fight battles and when to back down. She is strong, loyal to her friends, a fighter for Mixbreed rights and she can set people on fire, what's not to love? Kenya also introduces her audience to a variety of secondary characters who are just as interesting as the front runners. We follow Lanore are she dances her way through vampire galas and we watch her struggle to communicate with Rebel Shifters.

There is a SLIGHT love triangle in this book and I am extremely torn about it. While I am not the biggest fan of love triangles, I felt myself really struggling to pick who I wanted to be with Lanore (and I stand by my decision!) and was becoming more and more frantic when Lanore shied away from the path I picked for her.

For a debut author, Kenya' writing style is well polished. The story is told from the perspective of Lanore Vesta and Kenya does a great job of making her both likeable and seem very real.

Overall, this exciting first installment of the Habitat series is everything a novel should have: a thrilling mystery, a likeable set of characters with a world so vast that I just need to know more. Kenya Wright urban fantasy novel will be an instant favorite for fans of the genre!

Recommended for: Fans of the adult paranormal/urban fantasy genre.