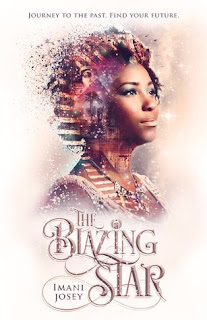 
Sixteen-year-old Portia White is used to being overlooked—after all, her twin sister Alex is a literal genius.
But when Portia holds an Egyptian scarab beetle during history class, she takes center stage in a way she never expected: she faints. Upon waking, she is stronger, faster, and braver than before. And when she accidentally touches the scarab again?
She wakes up in ancient Egypt—her sister and an unwitting freshman in tow.
Great.
Mysterious and beautiful, Egypt is more than they could have ever imagined from their days in the classroom. History comes alive as the three teens realize that getting back to the present will be the most difficult thing they’ve ever done. Stalked by vicious monsters called Scorpions, every step in the right direction means a step closer to danger.
As Portia and the girls discover that they’re linked to the past by more than just chance, they have to decide what it truly means to be yourself, to love your sister, and to find your way home (goodreads).

The Blazing Star misses a certain "oomph" and became a "skim-read" for me.
Plot: Portia is used to living in her twin's shady. Alex is always being awarded for one thing or the other, and the worst part is that Alex has the heart of Portia's crush. This is all changes when Portia is transported to ancient Egypt and seems to be the center of everything - not only that but she has magic. Portia finds herself on a wild ride that has the future of Egypt hanging by a thread.

I liked the beginning of The Blazing Star because I could understand Portia's frustration with her family and friends, but once the setting changed I lost all interest. This may stem from the fact that the writing style didn't mesh with me, but I was not engaged in Portia's quest to find answers and ended up skimming about 100 pages. The story is fairly standard with a 21st-century girl being transported to an unknown world. It has been done before and there was nothing in The Blazing Star to set it apart from other books.

Characters: I was initially very sympathetic toward Portia because she felt ignored and that she would never amount to what her sister, Alex, had accomplished. I lost interest in Portia once she arrived in Egypt, mostly because she took the whole situation pretty easily. Of course, she questioned where she was and how she got there, but she accepted her fate without much of a fight and settled in her new life. I found that to be unrealistic. There are various secondary characters that I couldn't keep track of, and even though most of them played important parts, they never felt like actual people.

Worldbuilding: First thing's first. I'm a sucker for anything set in Chicago, which may have been why I thoroughly enjoyed the first third of the novel. Maybe it's because Chicago is a real place that Imani knows about - but I found Chicago to be the only believable setting. Ancient Egypt used all of the correct language and worshiped all the correct gods, but it never had any heart. Even though Ancient Egypt was the primary setting, I couldn't imagine what anything looked like,

Short N Sweet: The Blazing Star wasn't able to draw me into the story unfortunately because of its flat landscape and characters.